When the South Broxtowe Blue Plaques Committee was formed, it was unsure how many of these commemorations of people and place it would erect - perhaps about a dozen it was thought. Now, after five years, it has completed its work with 34 plaques now in place - a remarkable and commendable achievement which has provided welcome historical awareness throughout the district.

Formed as a joint initiative between the Beeston & District Civic Society, Beeston & District Local History Society, the Stapleford and District Local History Society, and the Bramcote Conservation Society, under the able and energetic chairmanship of Peter Robinson, the committee has done an excellent job by any measure. And, remarkably, the whole project has been self-financing with the cost of the plaques borne by the property owners or other interested parties. 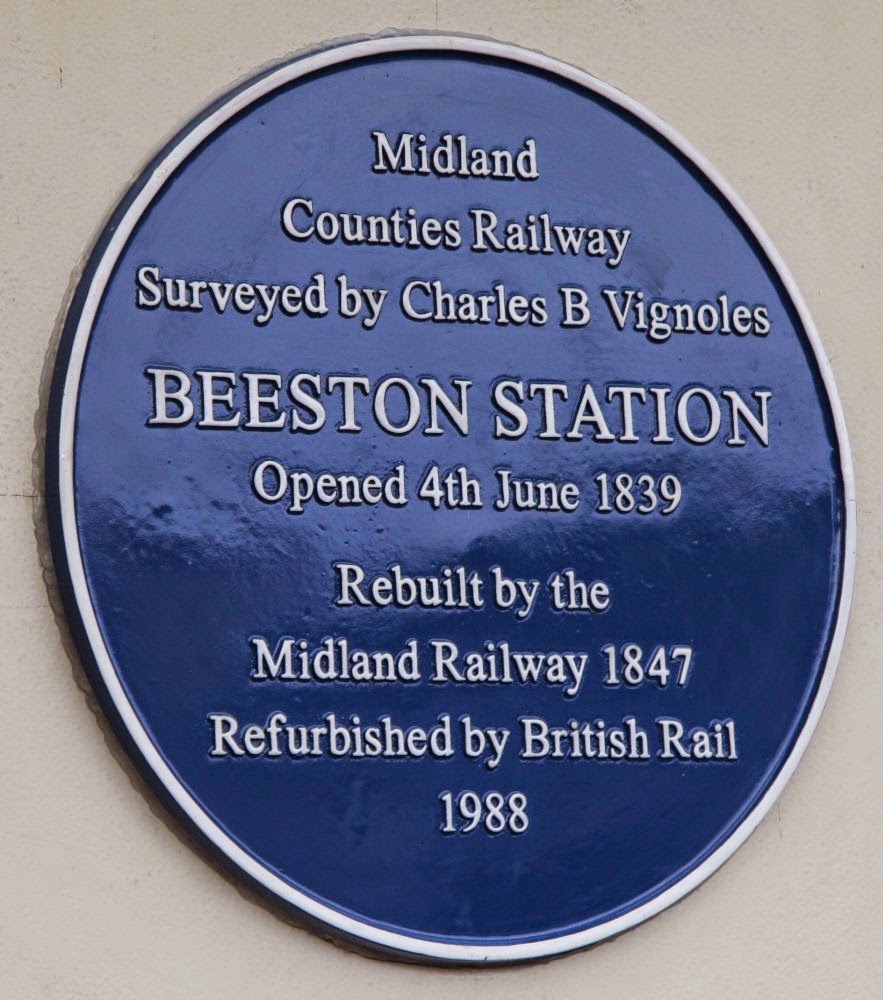 The final plaque was unveiled a few days ago, to mark the 175th anniversary of Beeston Station.  Alan Dance reminded those who assembled to mark the occasion that the station was opened on 4th June 1839 by Midland Counties Railway as a stop on its newly opened line from Nottingham to Derby. In 1844, that company became part of the Midland Railway and the station at Beeston was rebuilt, essentially in its present form, in 1847.  It is probably the oldest station building, still in use in Nottinghamshire.

The station became an important part of the Beeston community, opening it up to the world beyond - and increasing the awareness of Beeston by the outside world. Throughout its life in the 19th Century and well into the 20th, it played a major part in the development of Beeston's industry, the increasing popularity of commuting attracted new residents from Nottingham and leisure travel became attractive for many.

By the 1980s, however, things were changing, parcels and mail went by other means and passenger traffic was falling with only a few trains stopping at Beeston, British Rail proposed to demolish the buildings, leaving Beeson as an unmanned stop.  Happily however, there were local people who had other ideas and, after an energetic campaign, British Rail was persuaded to undertake a comprehensive renovation of the station. Now it is once more providing a rejuvenated service for local passengers, providing speedy access to many parts - including now, ready access to the Continent.

The plaque was unveiled by Sir Neil Cossons, past Chairman of English Heritage who was born and raised in Beeston and by David Horne, Managing Director of East Midlands Trains at the invitation of the Mayor of Broxtowe, Councillor Stan Heptinstall.  During the introductions, the Mayor thanked the committee for its excellent work which had hightened awareness of the the contributions made locally by people in the past and of places of importance.  Both David Horne and Sir Neil spoke of the momentous day on 4th June 1839 when the first train passed through Beeston to the amazement of local people, most of whom had never seen anything like it.  It was to change everything - many travellers, assisted by a growing number of travellers' guides, would see Beeston for the first time and Beeston would have access to the rest of the country. 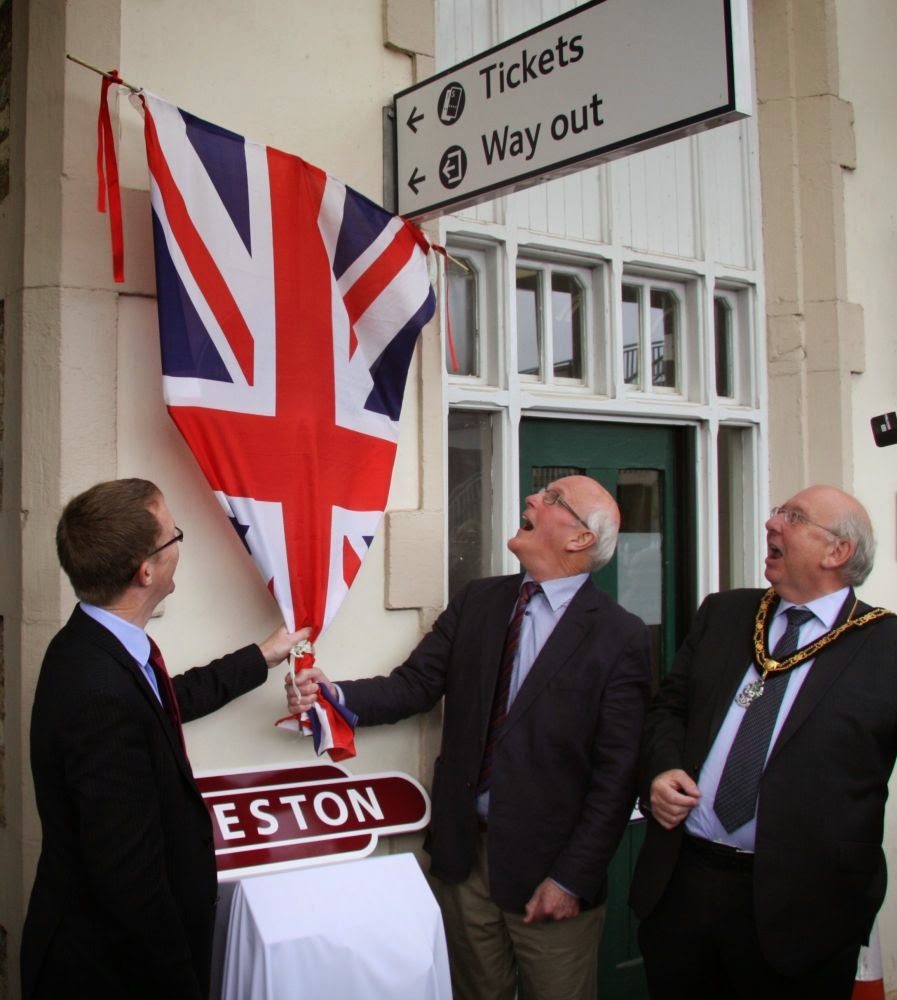 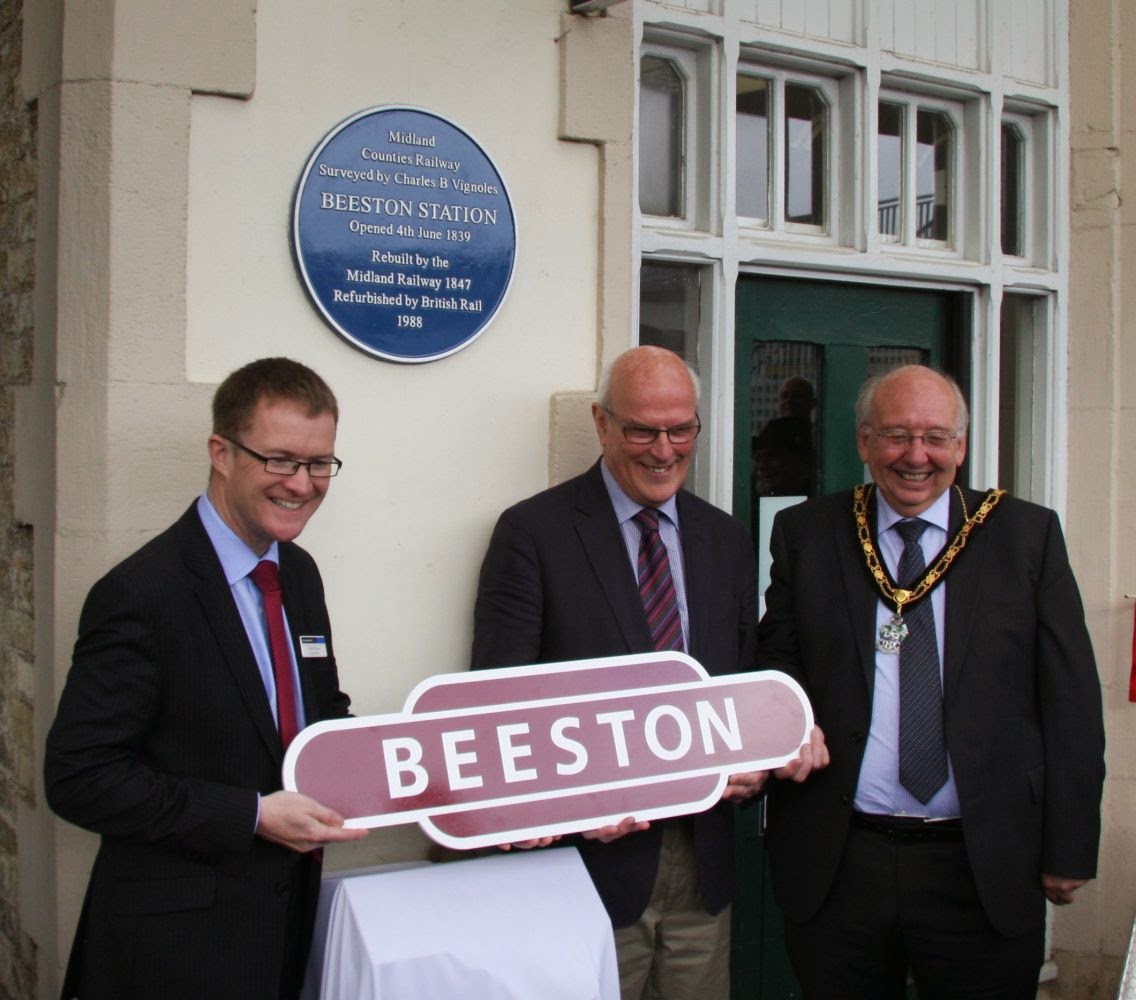 Click here for more photographs taken on the day

Now travellers leaving or arriving at the station have a permanent reminder of that day in 1839 and the 175 years that have passed since. A worthy plaque recipient indeed !
Posted by David Hallam at 11:54 AM