On Saturday morning I was very pleased to attend the opening of the new Pearson Centre for Young People on Nuart Road - on what was part of Roundhill School field. This excellent, purpose-built building replaces the old Lads' Club building on Station Road which has now been demolished as part of the Tesco development. The centre provides a wide range of activities for young people and facilities for the community and is the home of the 17th Nottingham Boys Brigade and the Girls Brigade. 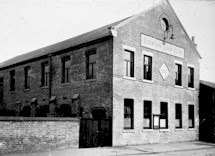 The old building (shown left) - and the sports field on Queens Road which is also being redeveloped - were originally given, for the most part, by the Pearson family - notable Steven Hetley Pearson who was killed in World War 1. The original building - opened in 1913 and extended in 1915 - served generations of young people for about 95 years and it owes much to the foresight of the original donors in providing these facilities that the provision of such excellent new facilities has been possible. 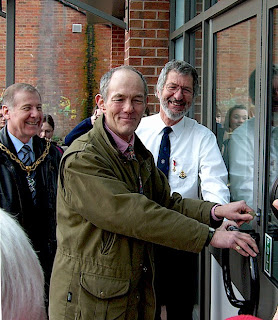 It was appropriate therefore that a member of the present generation of the Pearson family, Simon Mark Pearson, a great nephew of Steven Hetley Pearson - and grandson of Gervas Pearson - should officially open the new premises. In this, he was ably supported by the Mayor of Broxtowe, Councillor Brian Wombwell and the Chairman of the Centre, John Wilson. This historic moment in the life of the centre is shown above.

We wish the centre well in its excellent work for the young people of Beeston and district.
Posted by David Hallam at 9:38 AM No comments: