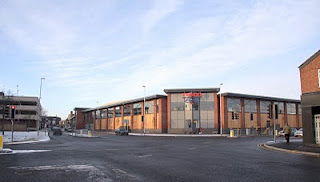 We will just have to wait to see whether or not history repeats itself !
Posted by David Hallam at 8:01 PM 1 comment:

As I write, we are in the period of a General Election - although, as these things go, this one, so far at least, has been remarkably quite locally.

Its time though to recall what, for some reason, is one of my strongest memories. It is from February 1950 (I was 11) when I found myself standing in the yard of the old National Schools on Station Road - then the headquarters of 2nd Beeston Sea Scouts, now the site of the recently closed Fire Station - looking over the wall to watch the excited crowd around the door of the Station Road Sunday School hall opposite. In the centre of the excitement was Martin Redmayne, the Conservative candidate who was emerging from his eve-of-poll meeting. The next day, the 23rd February, he was elected as the member for Rushcliffe Parliamentary Constituency.

In those days - and continuing up the major boundary changes in 1983 - Beeston was part of Rushcliffe Constituency which then, as now, also included West Bridgford and a large area of rural Nottinghamshire south of the Trent. It had been that way since 1885 and, for over 30 years, up to 1918, returned a Liberal member - first John Ellis who died during the election of December 1910, followed by Leifchild (known as Leif) Jones. During the inter-war period, and continuing up the Labour landslide of 1945, Rushcliffe returned Conservative representatives - Henry Betteton up to 1934, followed by Ralph Assheton. In 1945, following the national trend, Florence Paton was elected for the Labour Party.

When he was selected to contest the Constituency for the Conservatives, Martin Redmayne, born in 1910, was seen as an ideal candidate. He had served in the Sherwood Foresters during the war, commanding the 14th Battalion in Italy in 1943 and the 66th Infantry Brigade in 1944/5. After the war he had returned to continue to run the Redmayne & Todd sports outfitters business in Nottingham and was therefore quite well known locally. When I was taken to the shop , before Christmas, probably of 1948 or 1949, to choose a present, he was serving in the shop and I remember my father speaking to him about his selection.

He was to serve as the local MP for 16 years until, in 1966, he was narrowly defeated by Anthony Gardner for Labour - who, in turn, was overturned by Kenneth Clarke who holds the Rushcliffe seat to this day. Redmayne was created a baronet in 1964 and made a life peer in 1966. He died in 1983.

So - as I look back on that moment in 1950 as the candidate emerged amongst the cheering crowd of local supporters, it seems that much of the truly local atmosphere - something that was enough to capture the interest of an 11 year-old - has been lost in the last 60 years. It is certainly in sharp contrast with today's largely national campaigns, fought on TV, on Twitter and in blogs !
Posted by David Hallam at 10:15 AM No comments:

With a hint of better weather in the air, it was time to take a look at what has been going on in Beeston in heritage terms. And, I found it encouraging.

First of all, the churchyard has received a welcome tidy-up following the changes made to the church itself and the development on the previous Parish Hall site. The ivy that had badly encroached on the memorial stones in that corner - so bad it was difficult if not impossible to photograph some of them - has been cleared back and the gateway has been rebuilt with new ornamental ironwork - "to its former glory" as the old cliche goes.

In that corner too, stands the Crimean War memorial and I was very pleased to see it has had a partial refurbishment. Although the last one was carried out by the Council about 30 years ago after representations by me, I can claim no credit this time - but its good to have it in better shape again. As an external memorial to the Crimean War, its almost unique and it deserves all the respect and care it gets.

Further down Church Street, its nice to see the old Crown pub has undergone a very tasteful refurbishment which retains its position in the street scene very well indeed. Nice too, to see that it has opened as a more traditional pub - a small but welcome movement against the modern trend. Again, its probably about 30 years since the last changes there and, again, I recall being involved then in trying to retain the old archway entrance. At that time it soon became clear that it was impossible to remodel the pub as a viable unit if it was retained fully and the compromise we see today was made - a shallow remainder of the arch was left in the front showing the outline of its position. I have often wondered since whether it was worth doing.

I found welcome changes at Dovecote Lane Recreation Ground too, where the bandstand has received a welcome facelift. This is another feature that was last renovated about thirty years ago - that's when a group of us got together to form the Beeston Bandstand Project and campaigned to move it to Beeston Square where it would have had a more practical modern use. Again, a compromise was reached and the Council agreed to renovate it on its present site. Over recent years, sadly, it seems it has had little use but, nevertheless, it is a fine feature and the present splendid refurbishment is very welcome. As the only surviving bandstand it the County (as distinct from the City - where, of course, there is one in the Castle grounds) it deserves this attention and it is pleasing that it is getting it.

This recreation ground, and the one at Broadgate, came about largely as a result of the benevolence of the Pearson family. Each originally had a bandstand, though the one at Broadgate was removed a little while after the Second World War and even the one at Broadgate seems to have been moved before my memory from a more central point in the park to its present position. (see the photograph on the left - and another below showing the local population enjoying a day in the park listening to the band). The Pearson benevolence also provided goes the land on the other side of Queens Road which was, until recently, the Boys Brigade Sports Ground. When part of it was sold for housing, many worried that the sports facility would be lost, but the establishment of excellent facilities in a part of the land seems to me to be an excellent compromise. And, it has been named the Hetley Pearson Recreation Ground - a very fitting tribute to a man who established the Lads' Club and a reformed Boys Brigade about 100 years ago and who paid the Supreme Sacrifice, along with so many others, in the service of his country in the Great War. 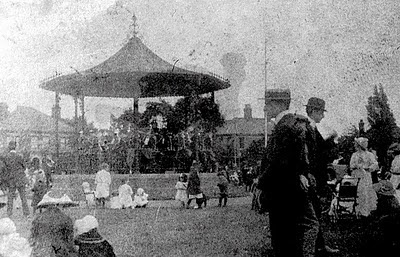 At a time when much of the centre of Beeston has been laid bare and so many of what was familiar has been lost, it is very pleasing to see some welcome changes, attention to detail and a feeling for Beeston's heritage.
Posted by David Hallam at 7:52 PM No comments: