End of a Year - End of a High Street Icon

At the end of another year it is time for a brief pause to look back. I see, with not a little incredulity, that it is over four months since I posted to my blog. That was not was intended when I started but that seems what has happened - clearly the basis of a New Year resolution here ! But, anyone who follows by site - and I know from your mail that there are many of you - will have seen many additions that, I hope, have whet the appetite for Beeston's history.

It has been pleasing to be able to work with several people over the year - some who provided useful material for me to explore and build a story around - and others who provided ready made articles that needed little more than converting to the site format. Several more important and interesting pieces are already in the pipeline - as well as material from my own research. Just keep watching the News page during 2009 !

But nationally, amongst the doom and gloom that we find around us, one old classic is about to vanish for ever - although, sadly for many, it vanished from Beeston about 40 years ago.

Frank Woolworth opened his first "5 & 10" store in America in 1879 and brought the formula to Britain not quite 100 years ago in November 1909. In just over 10 years there were over 500 F W Woolworth stores, with their familiar frontages and island-counter interiors throughout the UK. 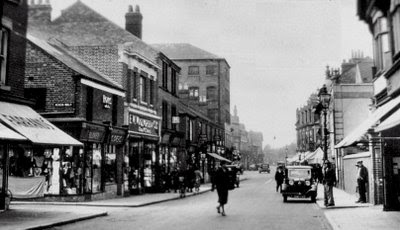 It was a little later - perhaps the early 1930s - when one opened in Beeston but, as the photograph shows it fitted into the street scene with ease.

Situated on the site that is now occupied by Superdrug, between Acacia Walk and Mill Yard and opposite what was then the Conservative Club - now Boots - it occupied a prime location on Beeston High Road.

Many from my era will remember it. It was a place where adults and children alike were welcome to browse its eclectic stock - which seemed to move about every week so that, when seeking out what you wanted, you spotted things you didn't know you wanted ! In the 1940s and 50s it was a "must" for a browse during every visit to the High Road. And for my generation and beyond it was often the place where one's first record was purchased.

Now its just about no more - truly the end of an era !