On Tuesday I made a nostalgic journey - into Canning Circus and out towards Bulwell - no trolley bus this time, the gas works is no more, as is much of the industry along the route, now the tram weaves through Hyson Green and beyond and the Northern Baths, where I learned to swim, is now a church. I was visiting my old school, Henry Mellish, on its last day. After about 80 years, it was closing and merging with River Leen School to become Bulwell Academy on a new site.

The school opened in September 1929, providing secondary education to boys, originally from both the County and City but, during much of its time, for boys from the County - including Beeston - only. It set high academic and sporting standards from the start - producing a steady stream of boys to the major universities and to government, the professions, industry and commerce. Its change from grammar school to comprehensive was regretted by many - and welcomed by others - and there was an unfortunate period in which standards dropped to unacceptable levels, but latterly it responded to the needs of a changed world with a clear ethos for today's aspirations.

All I can say is, for me the grammar school experience worked and certainly changed by horizons. Present day criticisms centre on elitism but I had no awareness of social differences when I was there. I was one of three boys from a council house background, five in total (as well as the girls who, in the main, went on to Brincliffe and those who lived in Lenton Abbey, who went mainly to Mundella) who went on from Beeston Fields Junior School in 1950. In an era where even local travel was limited, I was more aware of the amazingly different - and interesting - accents that I encountered than any class divisions that might have existed but were never apparent. The school offered opportunities, admittedly for those that the 11+ had identified as academically able, but, for my part, it was an opportunity that would not have been possible in any other way

Of course, there had been many changes since my day - many of the class rooms were now full of rows of computer screens, the metalwork and woodwork rooms now serve as a drama school and the gymnasium is now a dance studio ! Again, changes for changing times. But, there were some traces of the past - the teak benches in the laboratory where Mr McCandless taught me physics - with some success, as it turned out - and where I played chess every lunchtime, were still there and the facade and entrance of the school - offering a style which we can now appreciate - is still largely intact.

The name of the school came from Henry Mellish (1856-1927 - shown left) who lived at Hodsock Priory where he farmed a large acreage. He was very interested in meteorology and set up a comprehensive weather station at his home and recorded observations for over 50 years. He was very active in the North Notts Territorial Association - its Chairman in the critical years leading up to the Great War - a Justice of the Peace and a member of Notts County Council from its start. It was to honour his work on the Education Committee - for many years as its Vice-Chairman and Chairman - that, following his death two years earlier, the school was given his name. 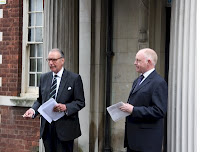 Now, almost 80 years later it was the turn of his cousin's son, Sir Andrew Buchanan, Lord Lieutenant of Nottinghamshire, to formally declare the school closed - and he brought along the original gold key that had been given to the family at the official opening in October 1929. The photograph on the right shows Sir Andrew (left), accompanied by Tony Bond, the present Head Teacher, showing the key to the many past pupils who attended. The key was then used to lock the front door, formally for the last time - and it still turned !

End of era certainly - but also the start of another. We wish the new Academy every success.

Click Here to see my photographic record of the day
Posted by David Hallam at 8:18 AM